The QSFP-40G-SR-BD-VC is a transceiver module designed for optical transmission applications over both MMF and SMF with transmission distances of up to 150m on MMF (OM3) and 2km on SMF.

The product is designed with form factor, optical/electrical connection and digital diagnostic interface according to the QSFP+ Multi-Source Agreement (MSA). It has been designed to meet the harshest external operating conditions including temperature, humidity and EMI interference. For applications over OM3/OM4 MMF, MMF cables are directly connected to the LC connectors of QSFP+ LX4 module and optical signal is directly launched from the transmitter into the MMF cable.

For applications over SMF, the module is used as a QSFP+ IR4 module and SMF cables are directly connected to the LC connectors of the module as shown in the following. 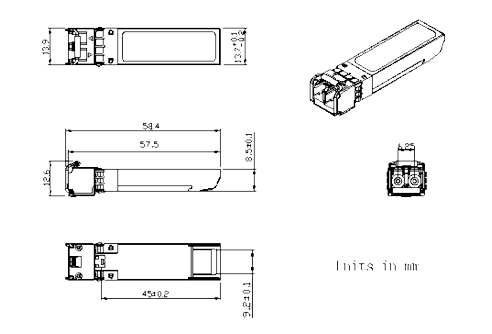 This drawing is for reference only. If you need more information and need to modify the drawing, please Email us：support@vchung.com

Answer: A: Generally, we pack our goods in ziplock bag and brown cartons. If you have special requirements, please let us know and we will try our best to cooperate with you.

Answer: A: T/T 30% as deposit, and 70% before delivery. We'll show you the photos of the products and packages before you pay the balance.

Q4. How about your delivery time?

Answer: A: Generally, it will take 2 to 10 days after receiving your advance payment. The specific delivery time depends on the items and the quantity of your order.

Q5. Can you produce according to the samples?

Answer: A: Yes, we can produce by your samples or technical drawings.

Answer: A: We can supply the sample if we have ready parts in stock, but the customers have to pay the sample cost and the courier cost.

Q7. Do you test all your goods before delivery?

Q8: How do you make our business long-term and good relationship?

Answer: A:1. We keep good quality and competitive price to ensure our customers benefit ; 2. We respect every customer as our friend and we sincerely do business and make friends with them, no matter where they come from.

Get A Free Product Quote

Simply fill in your requirement below to get your free, no obligation quotation today!
Your inquiry will be replied within 12 hours, and we respect your privacy.

Email Us: Just email us and we will review it carefully and get you a response in 12 hours.

Inquire about our product information and service details before ordering.

Resolve technical uncertainties and we will give a full analysis and resolve it.

This is an English language line and there will be a salesperson to communicate with you.

Add gamvinhuang as a friend, then feel free to chat with us on skype.